The color slides and negatives took a lot longer for me to have processed. 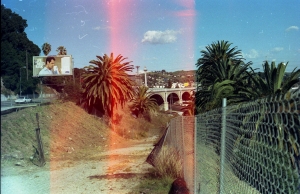 With the black and white film out of the way, I wrapped my unprocessed color film in the ziplock bags, put them inside (at this point) faded Samy’s Cameras bags and drove them (over 3 days) packed with a bunch of other stuff, from Chicago back to LA — stopping in St. Louis, Oklahoma city and Gallup NM. Me and that film saw some things, I can tell you. The film didn’t see anything, really, but baked in the recesses of the trunk of my old Prizm. Back in Culver City CA I threw the film into my mother-in-laws freezer where the film sat until my next move a year later.

So it was with some awe that actual images turned up on the film when I finally took it in for processing. I had the color negative processed first, and was braced for the lab to tell me that a lot of it had torn or flaked or fogged “like someone had frozen, then baked, then frozen and baked again, only to freeze one last time!” But the guy said nothing except here’s your film and that will be $400 or some such outrageous price — he smiled and invited me to always bring my film to him too!

It was then another year or so (sticker shock probably) before I got the slide film in to another (different lab) that was as expensive. I had to forego having my Kodachrome processed because Kodak had discontinued processing (and manufacturing) the film, so I got to lament the passing of an era in imaging with my own folly. Whatever was on those rolls of film will eventually chemically decompose away and those images are long forgotten.

It’s a funny thing about photography and (the idiocy of) waiting so long to process the film: there are shots I distinctly remember taking, and then there are shots I look at and say to myself “I took that picture?” Or “Why!?” That moment that has been stopped in time is not a moment that exists in any context of mine, so it’s like an image from another life, like those photos you see at antiques stores, of other people’s lives and families, images that no one care about anymore.